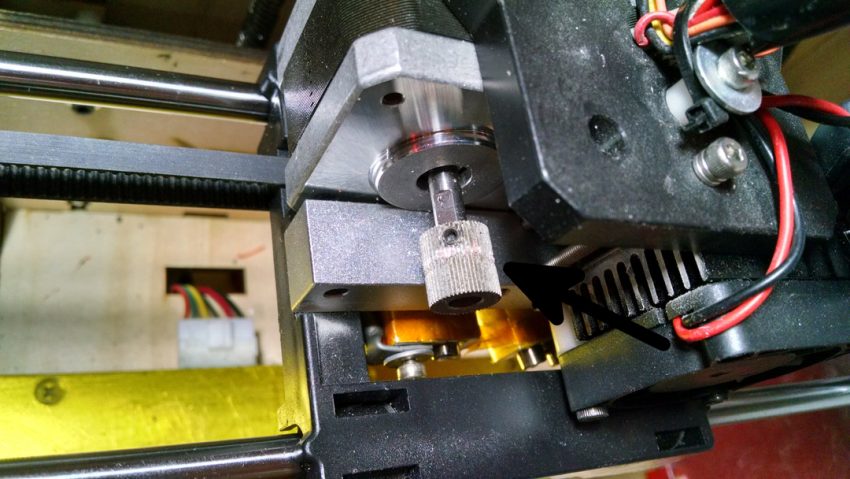 While 3D printing there are few things worse than getting half way through a print and realizing that the filament is getting stuck in the drive gear.  Which happens when you’re running cold filament on a hard metal gear with relatively sharp teeth.

Which leads to the need to clean out the drive gear!  Keeping the drive gear clean can help the filament keep flowing in the right direction and at the right speed leaving you with less errors on your prints and better layer adhesion.

The feed mechanism on the Replicator style 3D printers from Makerbot and the various open-source manufacturers consist of a drive gear applying pressure the the filament and a roller to help press the filament against the gear.  We’re going to take a look at what parts are involved on the CTC printer and how to remove and clean them.

First I unloaded the filament and waited until the printer was cool.  Not waiting for the printer to cool down before removing the various hot-end and cooling parts can result in being injured; so I’m not going to do that.

Warning: Do not force any parts together or apart.  The process notes here are based on a specific model of 3D printer and may not apply to yours.  Make sure you take all necessary precautions and refer to your manufacturer with any questions.

Once the printer is back at room temperature I needed to remove the fan through-bolts (two in the case of the CTC pictured).  I was then able to unscrew the two screws holding together our filament feed guide components.  Being careful not to loose any of them during the process.

With the feed guide removed the remaining part on this printer is a feed gear.  In the case of the CTC it’s held on by a set screw that needs to be loosened to remove the gear.  When I loosen up the set screw it comes forward and off the motor.

And it’s full of ABS gunking up it’s gear!

What I’m going to do to clear that out is get a set of brushes.  Since the gear in question is a hardened metal I’ll use a soft plastic brush and a harder brass brush.  I’ll then pick out any remaining bits of plastic with a small screwdriver.

Once that’s done the feed assembly gets rebuilt in the reverse order I took it apart and it’s back to extruding 3D prints!