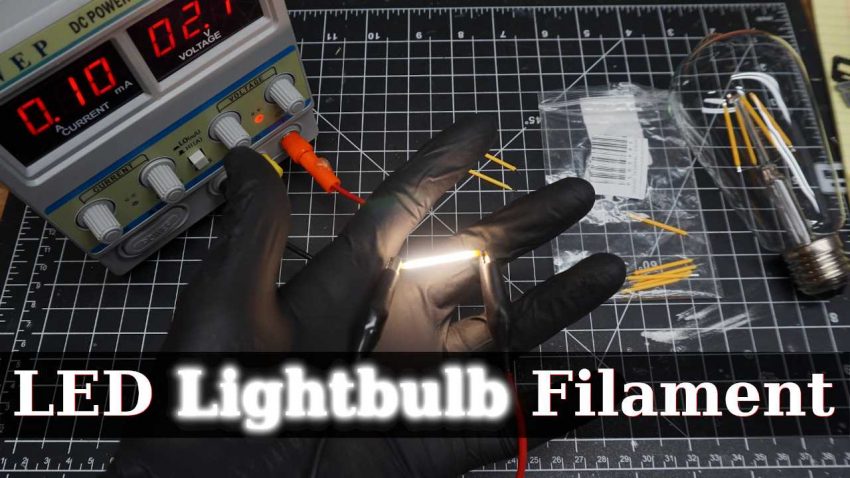 LEDs are the lighting of choice for economy and conservation. But they don’t have to look like sets of glowing dots. I have some attractive LED filament elements on my workbench to share with you today.

These faux lightbulb filaments are yellow silicone or rubber diffusers over the tiniest bar light you’ve ever seen. When I put the LEDs under the microscope they were around an 0402/0201 (imperial) or 1005/0603 metric. I say about because measuring at that scale gets hard, fast.

The light they give off was a bit surprising. While they’re in a yellow/orange sleeve the filament themselves are a neutral light. And the vendor on AliExpress lists them as “warm” but I’m guessing the light output is around 4000K~5000K range.

Initially I had pushed the filament to 3.0v. As it turned out these are around 2.7v parts and running at 3v resulted in 300mA draw. Which was unfortunate as it took me a few minutes to notice it was running that high, since 3v at 100mA is 300mW. And that made it easy to accidentally do the wrong mental arithmatic.

What else… these are strips of about 20 LEDs in series. Which makes sense given the 110v bulb styles which run two strips of parallel LEDs in series. That would give you 54v over each strip totalling out at 108, an almost perfect fit, with only a small amount of power to drop with a resistor.

And you’ll want to be careful handling them. In this sample package of 10 half were broken straight out of the bag.

In the future I’ll probably crack apart one of the LED filament lightbulbs shown in the video to give you a closer look at the inside. Because I’m curious what additional electronics they’ve got in there and if they’re using in-line resistors or something more complex.