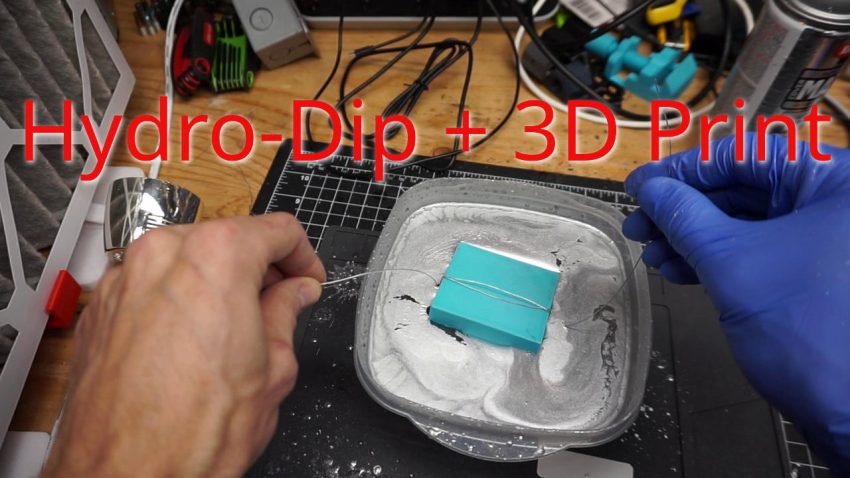 Hydro dip (or water transfer printing) is a process to paint objects by dipping them in a scum of acrylic paint floated on water. Since that seems pretty straight forward I’m going to try it for painting PLA prints!

There’s two caveats here. First, I’m using chrome paint which may react a bit oddly to the process. Second, the PLA may require some pre-processing to make this work.

And because I don’t have any idea how this’ll turn out we’re just going to try it. In the next 3D Printing video I’ll attempt a standard paint rather than the chrome.

Any time you’re spray painting it’s bound to get a bit messy. And even floating the paint on water this was no exception.

Unlike my attempt you’ll want to do this outdoors or in a box to lessen the overspray and mess. Although holding the rattle can a bit farther away from the water than when I started helps.

And then there’s the problem of where to hold the workpiece. You’ll want to attach something to it in advance to hold it by, if necessary. Buck skulls and guitars have an obvious holding area. While plastic printed parts really don’t.

For my first try at a PLA hydro dip I knocked off the rough edges and lightly sanded the piece for 5 minutes. Since I couldn’t find any guidance I figured this was a good start. Then the stand was vacuumed to remove any debris and my workspace was cleaned.

With the paint floated on the water and the stand wrapped with a bit of wire I set about dipping it in. Or trying to. As it turns out the acrylic paint didn’t want to bond to the PLA once the PLA was wet. And for such a small piece the paint seems to get clumpy on the surface.

Paint did stick to some of the flat surfaces. And between the letters, unfortunately, although that could be picked out if the rest of the job was good.

Unfortunately, it wasn’t. The paint sloughed off in patches and there was some bubbling on the surface.

I think that I may be able to make this work with some pre-treatment. Although it’s not going to be great for fine detail unless there’s something seriously wrong with my method.

Next time I’ll be trying a single standard color paint. And a bit thicker layer of it on the water.

We’ll see if that makes the difference in my PLA 3D Print hydro dip attempt! Until then I’m putting down PLA 3D print hydro painting as not recommended.