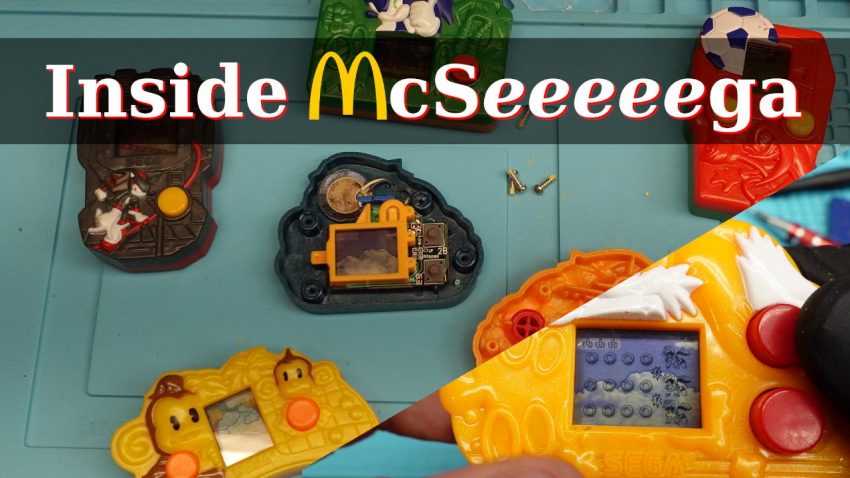 McDonalds and Sega teamed up in 2004 to produce a series of handheld LCD video game. Since they were weirdly past their prime we’re taking a trip down memory lane and tearing one apart. And repairing it!

Back in the 80’s portable gaming started innovating with LCD screens. Previously LEDs had ruled the handhelds with blocky single LED quarterbacks running for the touchdown or home plate.

From my memory, with rare exception these were one or two player sports games. While the occasional space shooter got lumped in on the platform it was mostly football (of either variety), baseball, or basketball. And that was down to those games having mostly universal rules.

The big sea change in handhelds came in the late 80s to early 90s with relatively cheap LCD based games. Suddenly you no longer needed to know what the dot represented; there was a picture of the Double Dragons, Contra, or Ninja Gaiden right there on the screen.

And then the world moved on. Small displays became ubiquitous and cheap over time, processing got incredibly tiny, and second hand consoles flooded in. Our incentive to purchase a very limited single use handheld game evaporated over time.

Which is why these handhelds from McDonalds struck me as odd when I brought them back to my workbench. Starting in 2004, Sega and McDonalds have sold (given away? prized?) old-school handheld consoles with their children’s meals. Presumably, for Sega, as some form of advertising.

At first glance I’m struck by the triangle drive screws holding these together. I’m not a huge fan of security fasteners. Not only are they intending you throw out the device but the manufacturer is going out of their way to ensure you do.

After taking off the fasteners each game shows a remarkably varied interior design. Normally when you create a commercial mas-produced low price product you vary it as little over iterations as possible. Less variation, higher profit margins.

Which isn’t what we’ve got here. With each individual unit I take apart I’m seeing a different internal assembly, molding, and overall design. Even the battery holders aren’t consistent between units (I’ll get the comprehensive picture gallery up below later today).

But fortunately for me, the only real problem here is the battery. Even after 17 years there’s only a little corrosion on the battery terminals and they clean up nicely with baking soda.

Of the problems I’m finding the more irritating is the adhesive on the back of some units. It looks like they may have been attached to a backer board on display.

My personal complaints aside on fastener choice these do have some neat design decisions. I’m finding strangely durable construction here for a throw-away. Heavy protective plastic covers protect the LCD and the buttons are on par with most portable consoles.

Power’s being provided by LR41 batteries (should you want to repair your own). Even though I have no idea what’s under those blob on chips it’s going to be energy efficient with a hard on/off switch. If you remember to turn it off!

So that’s about all there is to these. Additional components are a zebra stripe rubber connector for the screen mated to the single layer PCB and roughly five capacitors and resistors. And a piezo element molded into the case for the bleeps and boops.

I’ll have a photo gallery of the different models on my bench together later today. In the meantime, why not check

out our other teardowns?

2 thoughts on “The McSega: Teardown of McDonalds Sega Handheld Game”