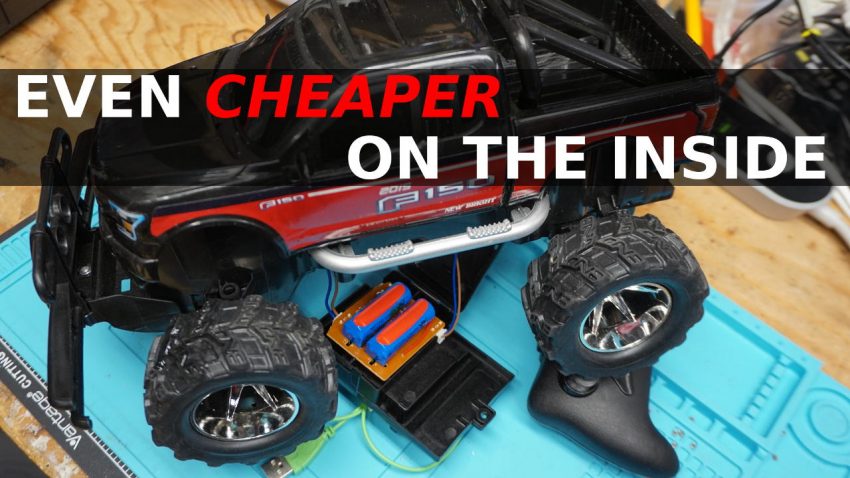 My first step to any electronics mod is to do a teardown and see what I’m working with. New Bright’s RC F150 truck looks like an ideal candidate from the outside. But is it going to make the cut for replacement electronics?

And that’s what I was aiming to find out by digging into the chassis.

I acquired the New Bright F150 second hand with some other parts RC cars a while back. Since this particular model was 2.4Ghz I was assuming that the New Bright remote control pictured there might work with it. And I was wrong.

What I found out was that these cars are incredibly cheaply made. New Bright seems to intend them to be disposable. Because as soon as they’re separated from their controller they no longer function.

Supposedly the steps to sync the controller are as follows.

And that’s it. You can see the 2.4Ghz New Bright RC remote in the foreground there propping up the wheels of the truck. When I tried to sync it the remote doesn’t do anything. So there won’t be any mapping of the signals to re-use the built in electronics in the car.

So what is inside the New Bright F150 RC Car?

Inside the chassis of the vehicle is a generous cavity containing a small circuit board. A cable pokes through a hole in what was, on former models, a battery compartment. And doesn’t have any strain relief making damaging it pretty short work for young users.

Tearing into the guts of the truck it has a basic circuit board with two lithium iron phosphate batteries attached to the back. The batteries are a relatively low capacity and should outlive the rest of the RC truck.

Up front we have a single brushless 3v DC hobby motor. And not the servo I expected. The servo would’ve been more expensive but used relatively less molding and gear components. So at a guess the DC motor has a lower total cost even with the extra chassis parts.

Up front gearing is simply pinned in place by the plastic frame where necessary. So the left/right return tension is provided by a single weak spring. For my purposes that spring will need more tension to work properly.

Looking toward the back of the R/C truck rear drive is provided by the same model of (presumably 3v) DC brushless motor. Gearing to drive the torque up is sitting loose in the plastic chassis without much lubrication.

And that’s it! Because there really isn’t too much inside this New Bright RC F150 truck chassis.

I’m looking forward to finding an electronics package that’ll let me control it. Although I do have some misgivings about that front steering DC motor we’ll see what I can do!