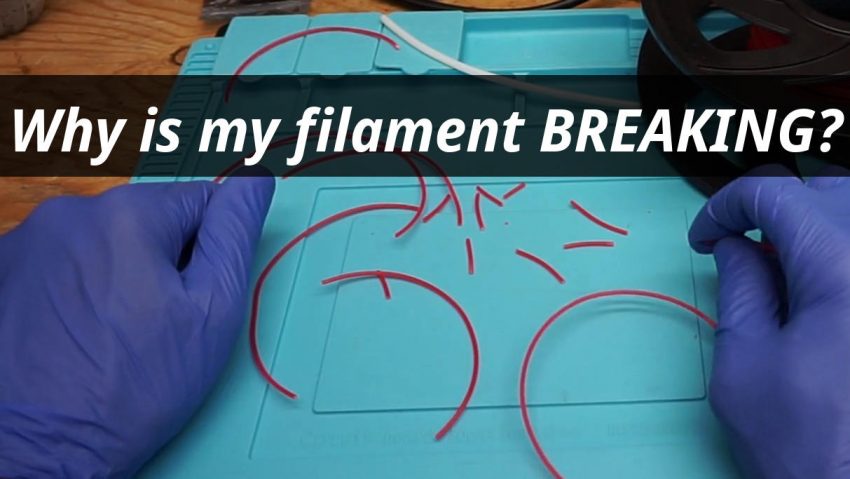 My PLA filament has started breaking into small pieces. But only under certain conditions. And I would like to know why.

So overnight I’ve set out a few test pieces to see how they react. Here’s what I’m working with and the tests I’ve performed on it. You can see how it reacted in the video.

What I’m working with in the video is a translucent red PLA. One of the ~10$ PLAs I purchased in for the first EBay PLA video. As a printing plastic the red PLA performed well over 2 kilograms of printing.

I’ve taken the “Natural” marking on the spool to mean something like largely unadulterated Natureworks 4042D PLA plastic with a colorant added. And I’m not positive, but that’s probably correct as the less engineering and added materials the lower the cost on the product.

While this spool has a more pronounced problem than the PLA+ from Microcenter that sits next to it they all exhibit the issue eventually. Because it doesn’t have any thing to do with moisture or directly with my Prusa i3 Mk3 printer.

I’ve pulled a piece of PLA out of the MMU2 PTFE tube that had been sitting for a day. Then put an identical piece in a PTFE tube sitting in a bench vice. And left a third piece out on the bench held straight by a couple of weights.

As a control I’m using the spool of PLA itself. Moisture isn’t an issue; this spool has been sitting out since it was purchased over a year ago with no issue. And the workshop the printer runs in is dehumidified.

And the Survey Says…

It looks like our culprit is a function of the plastic spooling itself. PLA really, really wants to conform to the shape it was originally cooled in when it was turned into a string. Once its crystalline structure is cooled on a roll in loops it doesn’t want to be pulled straight for any length of time.

And this happens with modified PLA filament eventually as well. Some of the co-polymers introduced to the blends likely slow down the effect but don’t alleviate it.

So I’ll be rolling my PLA back onto its spool when I’m finished with it. That’ll save both the PLA and the headache of coming back to an air print when the filament has silently broken off before reaching the extruding gear.

2 thoughts on “Why does my PLA filament keep breaking?”