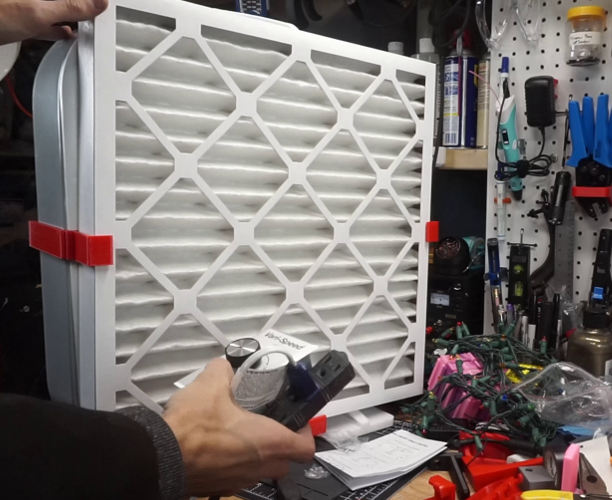 Building your own box fan filter is a great way to reduce the amount of dust in your workspace. And you can build it for just about the cost of the fan and a suitable filter.

I’m taking that one step further and adding in variable speed motor control inline with the box fan filter itself. For the cost of an additional triac to chop the voltage to the motor I’ll be able to trim the fan speed up or down depending on the amount of noise and airflow I’d like.

I also created some oversized snap-in feet for the fan to keep it off the damp floor. They have slot-in areas for stand-offs if I need to add additional height later. And they provide a big, blocky area for the box fan filter to stay stable.

The box-fan filter holders are a 3D print in red PETG. Initially the build used three of them to slot the fan in; I’ve since added a third on top to help keep the filter in place.

3D printed parts were printed on the Prusa i3 Mk3.

You can find the files I’ve 3D printed in the following places:

For the air filter in this build I’m using a Nordic Pure MERV 13 20x20x2 air filter. I can’t recall if it was purchased directly from Nordic but if you click around I’m sure you’ll find the best price.

Amazon’s Basics PETG was used to print the fan mount components. I don’t see the bulk pack I purchased available at the moment. It consisted of 5 different spools and worked out to 13$ or so per kilogram.

Extended feet were printed in whatever PLA I had loaded in the printer at the time. It’s likely an old generic roll.

I used a triac fan speed controller commonly found on Amazon. And not the cheapest part; that looked a little too inexpensive.

And that should wrap it up. If I missed any components of the build or you’re curious about anything else leave a comment below!