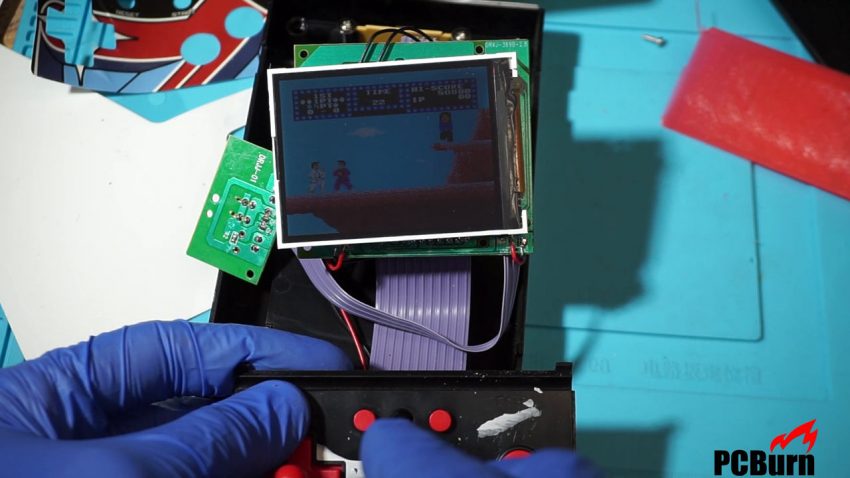 Data East released Karate Champ, a twin stick fighter, nearly 40 years ago in 1984. Fast forward to 2017 and “My Arcade” releases one of their mini arcades based on it. And I’m tearing it apart.

These mini arcade boxes are fairly similar to the Genesis clone I recently took apart. Although they lack a cartridge port which would make them quite a bit more interesting!

But (unfortunately) this isn’t the Arcade version of Karate Champ. Because the Arcade was a dual stick game while this is using an NES style joystick and two button combination. Which leads me to think it’s the NES cart being used here.

Someone’s missed a golden opportunity to offer up a good product. While I don’t make license deals I’d assume the license for the game isn’t remarkably different for the arcade version. And the twin stick arcade version would’ve been better.

So getting in the case is a bit of an issue. I discovered that the fasteners are under the stickers on the side. Which I’d argue are most of the mini arcade’s value.

To get at the inner assemblies I went ahead and removed the stickers, destroying them in the process. Once the rear and side screws are out the system’s back pops off revealing it’s guts.

Four daughter-board assemblies and the speaker make up the inside of this little cabinet. Everything inside is built to the usual standards of a US clone system; ubiquitous (horribly stiff) gray ribbon cables between the boards and mediocre solder.

I couldn’t find an immediate match for the LCD display’s part number. But it does look similar to off the shelf LCD’s I’ve purchased for projects in the past. It also looks quite good in use.

Our system processor is a black blob of epoxy. Lying underneath is likely a Nintendo on Chip.

A serviceable joystick-on-board design with conductive silicone caps hides under the tray of the case. Broken out but unused are some extra button pads; so I’ll explore those and let you know if they’re interesting. On a cursory inspection nothing interesting happened while pressing the hidden buttons.

And rounding off the design are an audio breakout board and a USB power input board. Neither of which posses any unusual components.