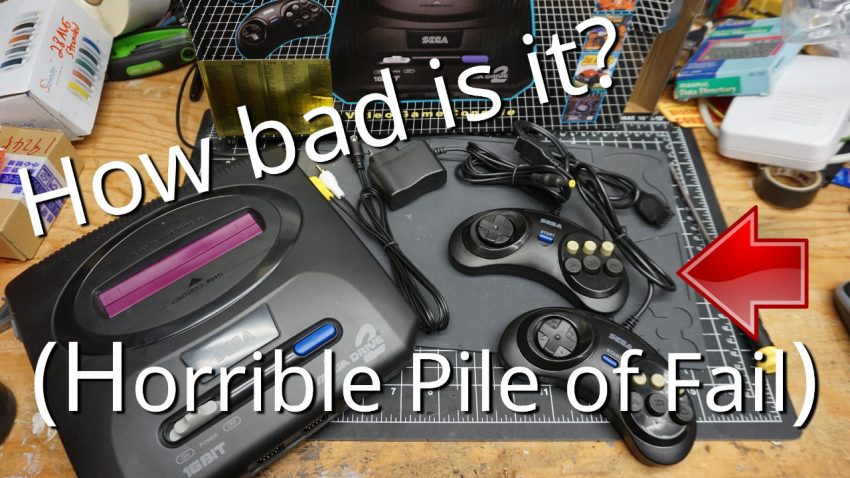 Sega Genesis entered onto the market at the very tail end of the 80’s. This was during the fourth generation of video game console alongside the Super Nintendo/Super Famicon and Neo-Geo. This particular unit, unfortunately for me, didn’t come out then and is a horrible pile of failure.

Unfortunate because what I was actually trying to locate and purchase would’ve been far nicer, and weirder, hardware.

That system was a Brazilian clone, released at the tail-end of Sega’s Genesis run. It featured different chip-sets than the original but no less quality in manufacture or components.

This system does share one trait with the clone machine I’ve been on the lookout for: the pink cartridge slot housing. However, the similarities end there.

They may have gotten their hands on some of the original molds these systems are a far cry from those clones. While those were a very interesting piece of hardware that rivaled the Sega Genesis (or Mega Drive) system even this case uses the cheapest plastics available.

These knock-offs are a system on chip that you’ve probably seen in handhelds. One of which has been floating around my bench; I’ll be tearing it apart in the not too distant future.

The joysticks are painfully bad with short cables, clam-shells that feel squishy in my grip, and buttons that rock everywhere but down. One doesn’t actually work properly out of the box. And they’ve cut off the edge of the last button’s surround to make the molding a bit cheaper.

But how’s the performance?

And, oh, the playback of the included games (5, not 300+) or external cartridges. What can I say? Because it’s horrible. I’ve never actually seen a system fail quite this badly at what it’s purporting to be.

If you watch the tail end of the video you’ll see what I mean. This poor little game console struggles to actually throw the Genesis video and audio up. Which means it lags horribly with the iconic themes playing at about 90% speed. Not just horrible; horribly disconcerting.

What I’m getting at is don’t buy this. Not unless you really, really want that peculiar Sega Genesis knock-off clam-shell for something else. Because that’s about the only thing that’s usable here.

Coming up next I’ll be seeing what those small pads visible on the main circuitboard do by soldering up switches and testing them out. While I’m at it I’ll also add a power light to show when the system’s in operation.

And if I’m really ambitious I’ll design a 3D printed micro housing, possibly portable, for all of the electronics boards. That’ll involve some CAD work to create the housing and then a re-wire of those nasty ribbon cables. Because one of them has already needed a re-solder while it’s been sitting on the bench.

Eventually the electronics will get recycled into a cart/joystick tester for Genesis kit, electrical testing being all it’s good for. And the rest is going into the parts bin. Maybe the case will become a tiny PC or Orange Pi media server.