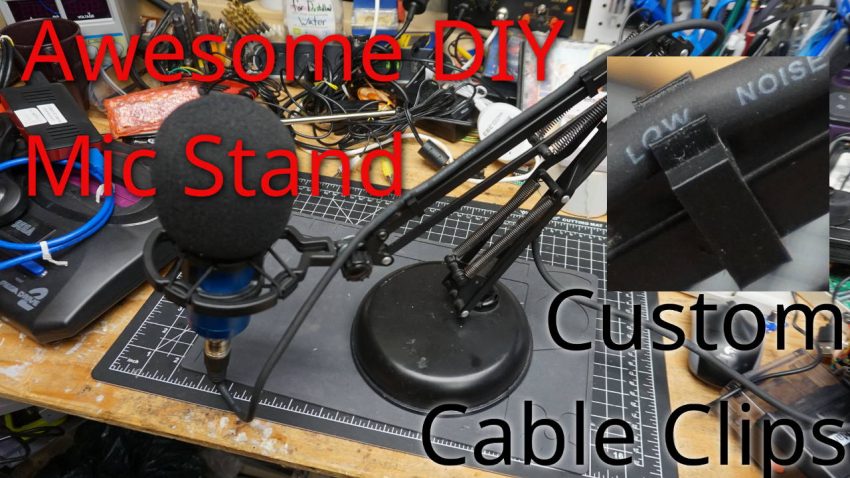 I’m building a weighted base DIY mic stand! Rather than buying it in off Amazon I decided to DIY it and build my own.

Swing lamps already have return springs and positionable retention screws on them to hold a light in place. And coincidentally they’ve got just about the right retention for a standard mic bracket.

Cost savings are nice but in this build they’re secondary. Because I couldn’t actually find a stand that would work just the way I wanted on my desktop recording setup. None of the available swing arms seemed to exactly fit the bill.

In addition I’ve 3D printed brackets (out of the PETG I’ve been testing) for the mic cable to route it effectively on the back of the retention spring arm. Those are available at GitHub or Thingiverse.

And I’ve since had a chance to test out the layout and make sure it functions well. The stand holds the mic at a good distance and height for standing or sitting at my desk.

One area I could improve would be the addition of a base holder for the Orange Pi Zero and Behringer U-Phoria UM2 I use for recording audio. And that shouldn’t be too hard to do; either replace the base entirely or add a custom tray onto it.

Additionally it would be nice to do something with the rest of the cabling. Currently it’s spooled up and velcro-tied to the base of the swing arm. A nicer solution would be better.

And possibly that’d involve shortening the cable down. In the near future I’ll order in a two or three foot XLR cable and see if it works out better with the design.

But overall the DIY mic stand is a success! It does the job and works a treat.