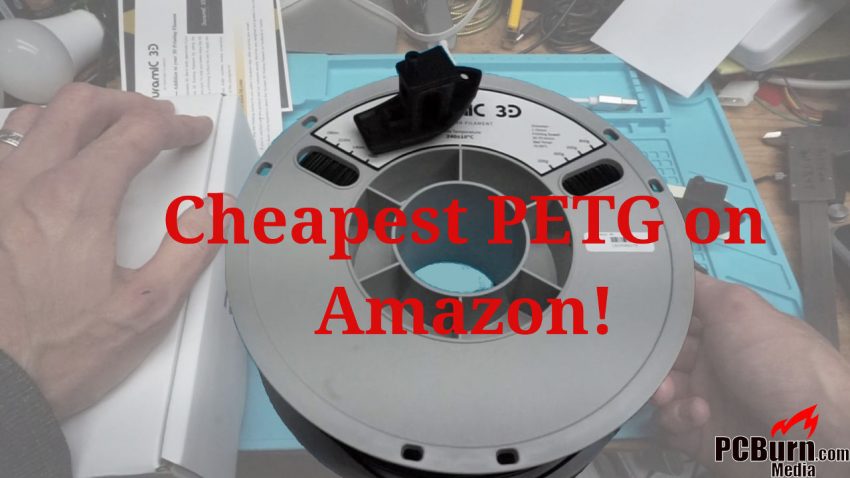 We’re once again taking a dive into the bargain bin at PCBurn, this time for PETG filament from Amazon. At 12.83, shipped, it’s certainly one of the cheapest filaments I could find.

Normally I’m leery (despite what the cheapest PLA on EBay videos I’ve made might have you believe) about running cheap filaments through my Prusa i3 Mk3 printer. Because I really don’t enjoy spending an evening ripping apart the entire hot-end to find a wedged piece of debris.

But there’s just something alluring about a too-good deal popping up in my shopping search. And my track record so far, MakerGeeks filament aside, has been good. With the worst filament that’s come in still being perfectly usable with an unusual amount of stringing.

So what’s the deal with this PETG filament…

I needed a PETG filament to print out the iterations of my motorized scanning table. And I really don’t like spending much for what (might) end up being throw-aways to dial in a design. So I had been keeping an eye out for a cheap filament.

And Amazon came through! While I was ordering up office supplies I noticed a budget option PETG filament listed in one of the Amazon algorithm generated sections. And at 12.83 it was, at least in the sort, the cheapest currently available on the site.

So naturally I purchased it. And since I always like to share the triumph (or horror) of an unknown purchase with others, I’ve made a video of the initial printing results.

I’ve also purchased a second roll in. There’ll be a follow up video once the filament has been worked through to confirm or invalidate what I found with the initial prints.

What You Get in the Box

Also a little surprising were the contents of the box. The filament itself came in a (probably Mylar) re-sealable bag. And stuck in the bottom of the box was a 220mm square sticky print surface.

I’m not sure how good the stick-on print surface is. And it would have to be a high temp plastic and adhesive to work well at PETG temperatures. But it should come in handy and it’s a nice add-on in the box, especially at the price.

And I am happy with the initial print quality. Everything looks like PETG should with no more than the usual amount of stringing. Plus it works with the standard Prusa Slic3r settings which makes everything a bit easier to use.

2 thoughts on “PETG Filament – is the Cheapest on Amazon any good?”