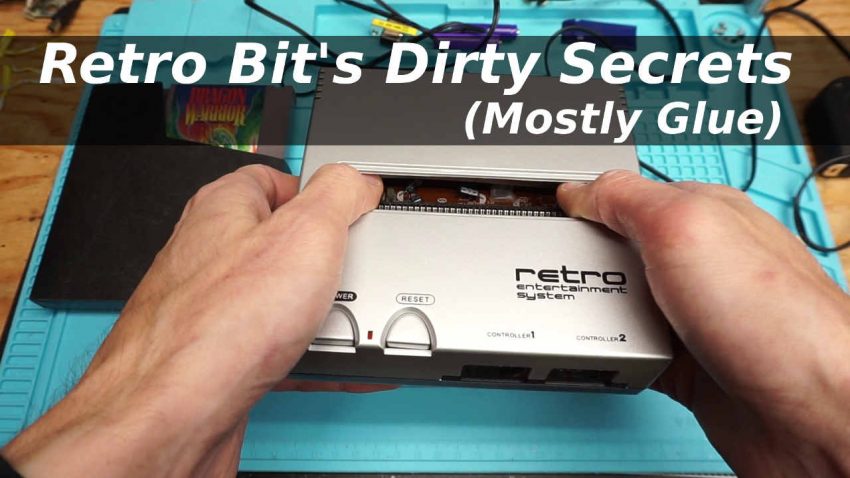 NES Clone systems have been around for some time now. But the Retro Entertainment System I’ve got on the bench today is of a newer vintage. 37 years after the NES first hit US shores how are these new clones systems being made?

In the early 2000s VR Technology started releasing their VTxx line (datasheets) of Nintendo systems on chip. All of which brought the price to implement your Nintendo clone down to “extremely low”.

And as you’ll see as I tear it down in the following video it’s certainly cheap. Because this system has very few discreet parts aside from the SOC. With the most expensive components likely being the connectors!

Much of this NES clone system’s internal construction mirrors the Sega Genesis clone I had apart recently. While taking it apart I noticed the same horrible grey ribbon cable that breaks in a light breeze.

The only other internal cabling is provided by two wires running from the circuit board to a bare straw hat LED. Which has been hot glued in place. And has leads dangling into the interior of the case; heat shrink, mounting glue, and strain relief obviously weren’t a priority.

There’s already a bit of circuit board masking coming off the A/V and power daughter board. For longevity I may spray it with a conformal coating product made to protect and prolong the useful life of circuit boards.

The rest of my look into the system’s internals was a bit rosier. I noticed the connectors were serviceable if cheap and the soldering job wasn’t too atrocious.

I’m not terribly familiar with the cartridge sockets on the old Nintendo systems. And to be fair it’s been nearly 30 years since I last seriously looked over an original NES.

But to me this cartridge socket doesn’t seem like it needs Zero Insertion Force. Instead I think I’ll dub this the Maximum Insertion Force socket (as you might note in the video when I insert the OEM Dragon Warrior cart).

I’m including internal pictures of the joystick here for completeness. But I left it out of the video since they always fall along the same lines. The controller did have a few interesting features like mounting pins for the circuit board and locating plastic on all of the conductive rubber pads.

Other than that I found the same circuitry design that always sits nestled up in a cheap ABS shell generic controllers use.

Conclusions on the Retro Bit

Every time I take apart one of these consoles for repair or a teardown it’s like opening a time capsule. I find that each one holds a story of the era in which it was built. Much like the original systems they emulate clones show off construction techniques and design budgets of their time.

Retro Bit’s NES Clone is recent and doesn’t have much to recommend it over the competition. But I did enjoy tearing it apart; and from the internals it’s probably worth the 10$ or 20$ USD these tend to go for. Just not with original cartridges!