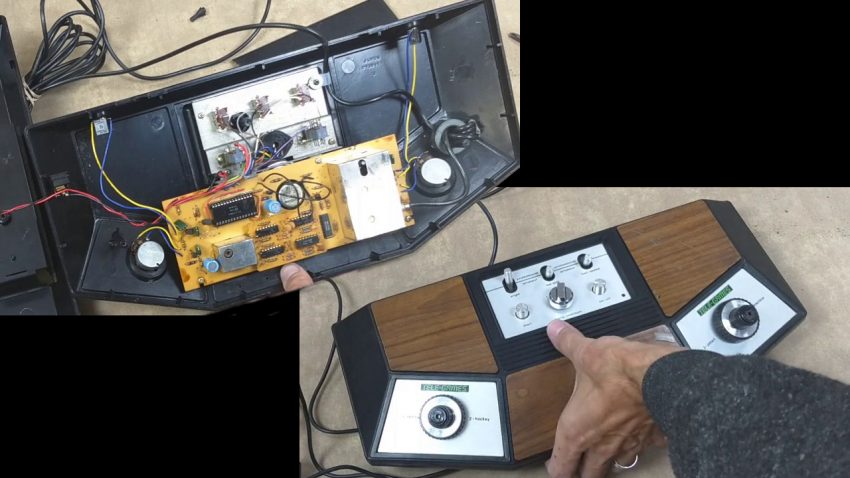 During the late 1970’s arcade games were just coming into vogue. Capitalizing on the trend General Instruments released their “Pong on a chip”, the AY-3-8500 and it was picked up for the Sears Tele-Games console.

We’re taking a look at a console based on the AY-3-8500 North America TV chip, the Sears Tele-Games. This’ll be the first console unit I’m taking a look inside here at PCBurn.

Under the hood it’s turned out to be a re-branded APF TV Fun 400 unit. APF turned out a range of single chip consoles in the late 70’s, all built around various GI chips.

I’m taking a tour through the simpler electronics of the era and that similarity’s not just skin deep! These were sourced from a Japanese manufacturing partner by APF and designed to a price point.

Even so, the price for one of the first stand-along video game consoles was quite high. Because of their novelty and the relative scarcity of other offerings these would cost you 90$ USD in 1978. In case you’re curious that’s 364$ today.

What else… these consoles have built in audio and feature two built in potentiometer joysticks. At least you won’t have to purchase any additional controllers!

And the single circuit board of the console looks as if the factory didn’t bother with any post processing. Because on one side the board hasn’t been cleaned of flux. I’ve cleaned some of that up while walking through the internals of this old beauty!

The APF TV Fun 400 is, originally, a RCA jack RF output device. Raphnet has a nice design for going direct to RCA Composite output and skipping the channel 3/4 output, but I’m unsure it’ll work (on this unit). My Sears Tele-Games has very clean output on channel 3 but a different and rather claustrophobic (circuitry) RF converter.

This unit’s joystick potentiometers are 1M ohm parts with a 25mm shaft cut for a knob insert. And these are either binned a bit off or they’ve seen better days; one comes in at 850K and the other at 920K. Although this might not have mattered for a joystick application.

I’ve run into a peculiar hardware gremlin on the Tele-Games unit as well. Interestingly, each player, the board, and the ball are all “fired” at the screen by individual pins on the IC. One of the pins, player 1, is ghosted on the screen.

Naturally we need to make some allowances for age with a 40 year old piece of electronics. I’ll be returning the APF based unit to the workbench in a follow-up video once I have a better idea where the problem lies. See you next time!