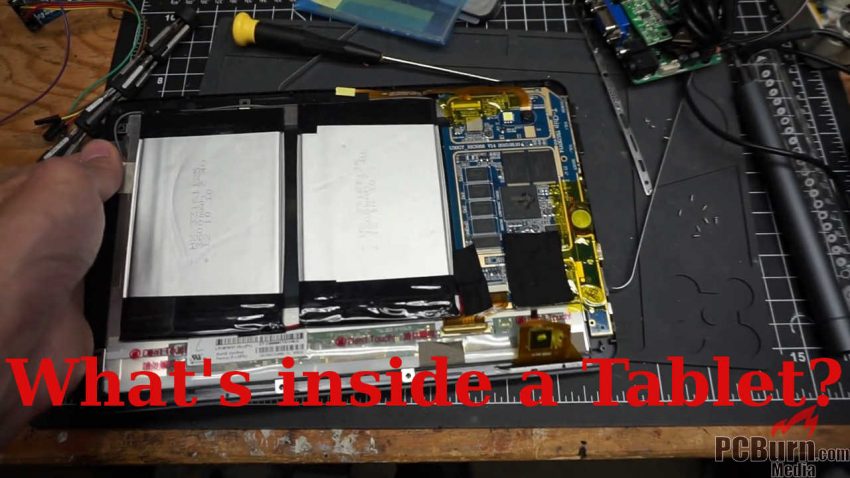 Have you ever wondered what’s inside a tablet computer? It might be a bit more general purpose than you think. And with parts more useful than the pong console. The Cube U30GT has reached the end of it’s life and I’m scrapping it for parts in this tablet teardown.

Re-using parts from a tablet computer is in parts both harder and easier than their larger, usually x86 or x86-64 cousins. While there are less recyclable components most of the parts are re-usable with a bit of hacking.

So what’s in a tablet?

When I take apart a tablet computer the case usually gets tossed. Unlike an old PC with a steel tower that can go to the scrap heap for re-melting. Although even that is changing with the prevalence of cheap plastic computer cases.

In place of a power supply there’s generally some form of Lithium based battery pack. These are easy to re-use if there’s life left in them. Mine are rarely very depleted in most of the end-of-life tablets I’ve turned into parts. And I’ve never seen one to expand in one of these.

Tablet’s usually sport an embedded ARM mainboard with proprietary, locked down, or downright archaic hardware. And with few exceptions you’ll be stuck running Android V.whatever on it if you’d like to power it up for a different use. Even the Atom based processor tablets I have are much harder to re-use if they’re set up to run Android exclusively in EFI.

What you see is what you want…

Internal Displays are a mixed bag. In more generic import tablets the manufacturers tend to spec build for clients using off-the-shelf parts that should be highly re-usable. So to that end I’ve got orders out for breakout boards with cabling and I’m searching for spec sheets on the displays themselves. Oddly, higher end tablets are more likely to use proprietary interface boards for the displays in my experience.

I usually only re-use the digitizer if it’s attached to the original display. Figuring out what the settings should be can be a bit of a pain with no documentation and I normally don’t have the time to separate them from the glass or plastic screen. I may be digging into this one in a future video to see if it’s salvageable.

And the only other things in there are a few peripherals; speakers, cameras, and switches make up the balance of the parts in a tablet. I’m currently looking up the cameras in the U30GT to see if I can find a pin-out for them. And that’s it for my tablet teardown.

Sadly I can’t find anything past Android 4.1 for the U30GT tablet. While a dual core chip with 1GB of memory would be able to handle Android 5.1 fine it was never released.

This is, to me, one of the biggest failings of the ARM systems and Android OS. Hardware gets abandoned to the scrap heap after a mere year or two of development while it’s peripherals and utility are still more than capable enough to be useful.

2 thoughts on “Tablet Teardown of the U30GT Android Tab”