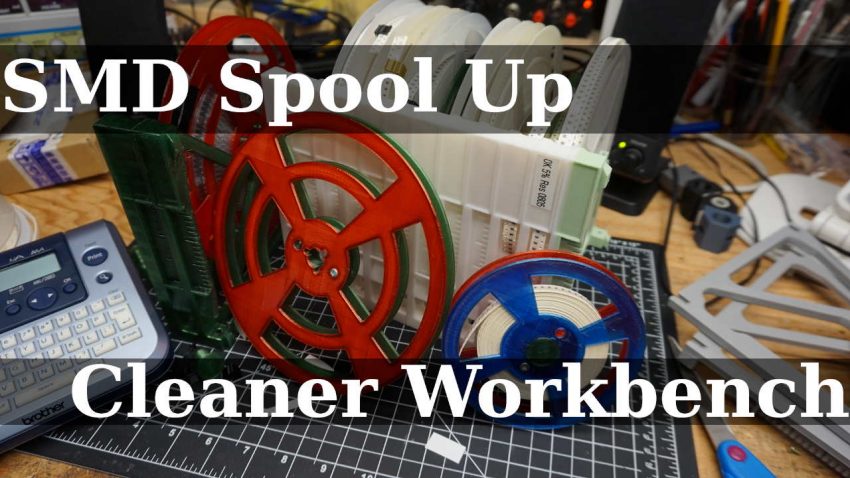 Spooling up loose SMD part tape for surface mount components makes sense. So you’re suffering under the weight of plastic bags filled with tiny parts on paper rolls? Read on for a slick SMD Spool solution for storing them.

Suddenly realizing my workbench was too cluttered (in the Phrozen Sonic Mini review) I decided to take action. But the eternal question, “where to begin?”, remained. So I started with the SMD tape lying around in bags.

Various projects that I start on require surface mount components. The 1000 count tapes of resistors, capacitors, inductors, and ICs tend to collect up. I might need these in the future but they’re surplus to current requirements on the bench.

So I’ve created a couple different sizes of SMD reel to store the surface mount component tape on. Each reel type has a locating stub and single screw hole for a flush mount M3 screw (of any sort, really) to hold it together.

Also, the reel holders pictured in the background work very well for holding the narrow version of these spools. Printing them with PLA made them easier to remove from the printbed. PETG tended to shatter, and PLA allowed the narrow format to work on my Prusa i3 Mk3 3D printer.

SMD Spool for a Cleaner Workbench

And so my workbench is now somewhat cleaner. Without the spools lying around on or next to it one of the major annoyances has been tidied up.

For the layout of the shop it also beats holding them on a long metal rod as I had been. Now I won’t have to remove every spool to get at the one (inevitably) farthest on the rack from the end.

If you’re looking for a way to organize those SMD components these spools and manual rolling dispensers might be just the ticket.