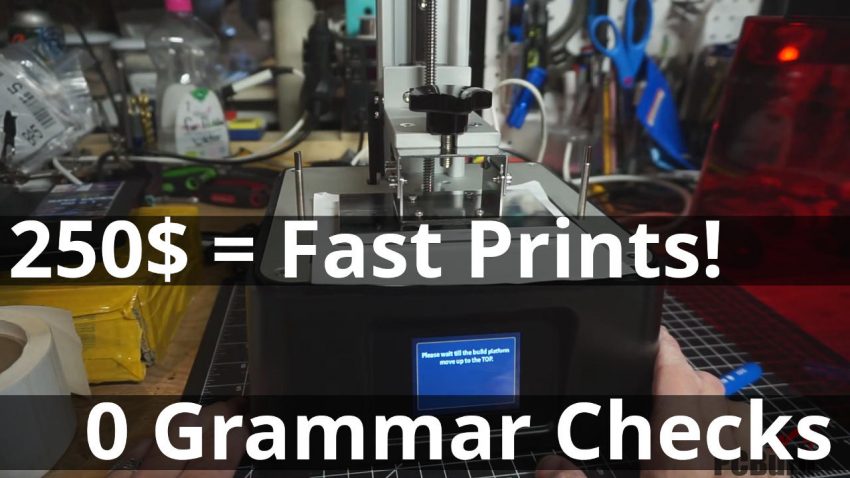 While I don’t often write reviews of products these days I just purchased a Phrozen Sonic Mini. So I’d like to share setup details and my impressions of the printer with you.

I purchased this UV printer directly from Amazon for roughly 250$ USD. And I don’t have a relationship of any sort with the manufacturer of Phrozen printers or their distributors.

Why did I purchase the Sonic Mini UV resin printer? I considered its low cost and the Phrozen’s specific feature set to make my decision on the purchase.

At 250$ its cost is roughly in-line with every other budget UV resin printer. And the feature set on this model offers up an interesting perk along with one print quality issue and a notable build trade-off which might come back to bite me down the road.

I’m pretty sure that the printer’s a good value. But the Phrozen is built to the price point. The first thing I noticed was the plastic, likely ABS, base. That may degrade over time with constant exposure to UV light; we’ll take a look at it in a few months to find out.

Next, for the print quality trade off, Phrozen has gone with a 1920×1080 resolution print screen instead of the usual 2K (2560 x 1440) or better display. Having 25% larger pixels will probably impact print quality.

Last we need to talk about the resin vat. The plastic vat they initially shipped was, by many reports, not good. I would guess (without testing this) that it was breaking down from UV exposure. And I purchased this model on Amazon with the aluminum vat included. So hopefully they’ve adjusted the build to include the aluminum resin vat as a default option.

But what you get for the trade-off in print quality and robustness of the build is a monochromatic screen on a budget. And that’s a pretty big benefit. Because the display can let quite a bit more UV light through and allows the resin to cure up to 4 times faste (going from 8 seconds to roughly 2). Although if that exposure rate or speed causes other issues with the resin is something I’ll be looking at.

As I’ve found out with most modern UV DLP printers set up is simple. Just follow the six steps displayed on the screen in order and you’re done.

I follow the same process on all of the UV printer’s I’ve had to set up. First remove the FEP sheet based UV resin tray. Then loosen the platform adjusting bolts, zero the Z height with a piece of paper in between the platform and the screen, and tighten the bolts making sure the paper is just tight enough to not move. The process of aligning a UV resin printer is generally simple and the Sonic Mini is no exception.

Print quality has been okay but I have yet to print the fine detail on small parts that I need for a UV printer. I believe this is a problem with the environment more than the printer itself; the viscosity on the resin is low in cool temperatures causing it to clump up as it cures resulting in distorted dimensions on the prints.

I’ll be digging into the scrap bin and building a heated cardboard cabinet with a candle warmer to generate the heat. And at scrap bin costs and very little time it won’t be pretty. But the enclosure should be functional enough to bring ambient temperatures up to what the UV resin requires.

If I had more time I’d build a temperature controlled internal heating element into aluminum platform of the printer itself. That’s going down as a future project.

So that’s it! The Phrozen Sonic Mini works as advertised and what I received is exactly what was on the tin. I’ll be returning to this printer in the future to review long-term build quality and how well it prints.

And I’ll be creating a few more UV printer utility devices similar to the DIY UV curing station from a few weeks ago. Such as modifying a junk ultrasonic jewelry cleaner into an agitator for cleaning the print parts. Subscribe to the YouTube channel and keep an eye out for that!

2 thoughts on “Phrozen Sonic Mini Review – Should I Buy It?”